by Matt Dalton July 20, 2020
Share 0FacebookTwitterPinterestEmail
The Galaxy Z Fold 2 is expected to pack stunning features, and there’s a great deal of anticipation behind it. Today, with less time remaining until an official announcement, a middling press reveal showing the Fold 2’s lustrous design has leaked on the internet. What do we think of it? Marvelous.

From what’s apparent, it seems that Samsung has taken the bold decision to embrace an identical camera design on the Fold 2, which is customarily adopted by the Galaxy Note series already.  The leak was initially shared on Weibo, followed by a flood of tweets.

The press reveals shown us that the Fold 2 is folded at a certain angle, only making two elevated cameras visible from the spot. Even so, reports lately have described that this foldable Galaxy phone is going to feature a sum of three sensors.

The sensors in question involve a 12-megapixel primary camera combined with a 12-megapixel ultra-wide-angle snapshooter, and lastly, a 64-megapixel telephoto snapper compatible with 3x hybrid zoom, all due to the courtesy of digital cropping.

To talk about the display, previous disclosures suggested that the external display of the Fold Z 2 is going to be bigger than the panel on the original phone. Moreover, there’s a growth in size from 4.3-inches to 6.23-inches thanks to the latest aspect ratio, reducing bezels as much as it possibly can.

For the internal display, however, there is an obvious revision as well. What was thought to consist of 7.3-inches is now, in fact, 7.7? Furthermore, the tech-giant company has also got rid of the corner notch and instead opted for a punch-hole, that seamlessly cooperates with the 10-megapixel selfie camera.

The press render wasn’t all about Galaxy Fold Z 2. Images have emerged of Galaxy Note 20 Ultra, Galaxy Buds Live, and Galaxy Watch 3. All these goods are expected to arrive in the spotlight at Galaxy Unpacked- a Samsung event that hosts the launch of new products, and official revelations. For now, we can see all these gadgets in the Mystic Bronze color, made available for purchase soon. 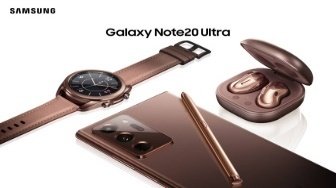 Samsung, along with a plethora of tech markets and websites, is bound to take preorders shortly after the Unpacked event. Nonetheless, not all the products are going to be released on one single day; they might have alternating launch dates.

Reportedly, the Galaxy Note 20 series are going to ship by August 21, while those eager to buy the Galaxy Z Fold 2 might need to wait a bit more, approximately till September 20.