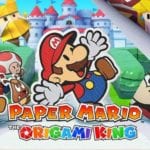 Paper Mario brings its own unique edge to the Mario world. Although most of the design elements remain unchanged, this title comes with a different story and even more different gameplay.

8.6 4.3 5
Average Score
Nintendo Switch users are in for a treat as Paper Mario: The Origami King is now up for grabs. Albeit the fact that the past few entries in the Mario franchise didn’t do wonders, this RPG right here has the potential to live up to all the hype it’s getting. As the title suggests, players are going to be getting a paper-based Mario world. Plus, the new gameplay might leave you surprised as well. So, let’s cut to the chase and get to review the new Paper Mario: The Origami King.

The storyline of The Origami King is rather simple. Princess Peach’s castle has been taken over by King Olly, and there’s only one way to get the holdback: by fighting enemies.

In this adventure, Mario will be accompanied by a friend of his. No, we’re not talking about the all-beloved Luigi here. There’s a new partner in town, and players will get to know her as Olivia. Although you shouldn’t be comparing her to Luigi in the first place, she brings her charm to the Paper Mario franchise and also happens to be the sister of King Olly. Throughout the journey, Olivia is going to be showing off her own personality by cracking witty jokes and being one powerful sidekick. As for the enemies, the game dubs them as Folded Soldiers because that’s what they really are—folded.

There’s no doubt that Olivia will serve as an interesting character, but Mario will keep making friends along the way. Accordingly, players will also get to see some of Bob-omb—a literal bomb who doesn’t remember anything about his past. He will start coming to Mario’s aid right from the start, and his humorous dialogues are sure to leave the players wanting more of him.

With that being said, Olivia and Bob-omb aren’t the only side characters with interesting dialogues and personality. As the story progresses, you will be coming across various other villains of the Mario universe, such as Bowser, Koopa Troopers, Goomba, and Shy Guys. Only this time, they will be supporting Mario in his battle against King Olly. Amidst these fierce battles, the dialogues are sure to get you losing it quite a few times.

As far as the game’s storyline is concerned, it’s what you’d expect from a Mario game: fun and straightforward. However, it doesn’t change the fact that the developers could have done a lot better job with this story. But, what makes up for it is its comedic value in that the Origami King doesn’t seem to be taking itself too seriously.

The gameplay is where Paper Mario: The Origami King truly shines. Albeit the fact that the game doesn’t come with a pure RPG experience that players got to see in its predecessor titled The Thousand-Year Door, the game gives its unique edge to the franchise by combining basic RPG elements with more of a strategy-based combat system. All of this contributes to providing players a stellar gaming experience that’s never been seen before in a Mario game.

When it comes to battles, our Mario will be in the center of what seems to be a dartboard with enemies coming to attack him from all sides. As a player, you are given two basic attack types: stomping and hammering. However, each battle will accompany a time-limit, and this is where the strategy element comes into play. You will have to get the enemies into groups by either rotating each ring or sliding the wedges back and forth, so you can attack as many enemies as possible with a single strike.

Even though this battle style is something you won’t get to see quite often, it makes sense why some might find the battles to be a bit repetitive. Plus, in the early battles, you won’t even realize that there’s a strategy involved because there will only be a few enemies. When it comes to boss battles, you will have to find your way to get to the boss and attack them. Accordingly, if you’re a fan of puzzle-based titles, the boss battles in The Origami King could be a real treat. Nonetheless, you shouldn’t mistake the fun aspect of these battles for the bosses being vulnerable since beating them could take you quite a few attempts. And, one more thing: The bosses? They are actual stationery items. Now, how gnarly is that?!

It is also possible to upgrade your weapons and purchase more of them. Apart from your base boots and hammer, you will also get to unlock their iron version (to attack spiked enemies), gold version (to make more coins), and a flashy/shiny version. Except for your basic weapons, all other versions will break with time. So, it’s always a good idea to stockpile weapons when going against a dangerous line of enemies.

Although The Origami King doesn’t come with cutting-edge visuals that make use of the best graphic processing capabilities of this era, the title stays true to its unique, aesthetic design that all Paper Mario fans drool over. As you’d expect, the entire Mario world has been carved out of paper, whether it be the environment, the buildings, or the characters. However, what distinguishes the heroes from the bad guys is that the former has a white outline, while the latter is made of origami.

As for The Origami King world, players will get to explore several territories, ranging from an enchanted forest to a skyscraper theatre inside a samurai theme park. It’s an open-world, in its most real sense, and a lot of players might also see similarities with the shrine and dungeon stand-ins that were a part of Zelda. All the battles take place inside of an arena where Mario has to face-off against enemies on a dartboard-like structure.

What makes the world even more colorful is confetti, and oh boy, is there a lot of it! With its help, Mario can fill in the holes in his path so that he could explore more areas and discover new items. In conclusion, there might only be a few titles that are on the same level as Paper Mario: The Origami World when it comes to providing such a unique, brilliant design and that too, without taking up too many resources. When it comes to sound design, the music has been chosen perfectly. During battles, it’s sure to get you all ready to kick some butt. Also, each dungeon has its unique music that goes well with the visuals.

Let’s face it: Mario has always been the center of attention when it comes to Nintendo Switch titles. And, this time, Paper Mario: The Origami King is all set to steal the show courtesy of its unique design, interesting characters, and puzzle-based gameplay. Although it could have done a bit better storyline-wise, let’s not forget that even the game doesn’t take its story that seriously, so why should we? After all, The Origami King is packed with witty dialogues and exciting characters, which are sure to keep you entertained at all times.