by Jeremy Knaul July 15, 2020
Share 0FacebookTwitterPinterestEmail
Lenovo launches its most powerful workstation to date in ThinkStation P620 which knows no bounds when it comes to processing power. What gives this machine the upper hand over other workstations in the market is the fact that ThinkStation P620 is coupled with AMD’s all-new Ryzen Threadripper PRO processor.

Courtesy of this processor, organizations will be able to meet their ever-growing processing requirements. It is also worth noting that the Ryzen Threadripper PRO processor makes all of this possible with the help of its 64 cores, which you won’t see sported by any other available workstation. Pushing the boundaries even further is the fact that this processor comes with up to 4.0GHz processing speeds, 8-channel memory support, and 128 lanes of PCIe 4.0 bandwidth.

By opting for this workstation, corporations won’t only be getting speed and flexibility, since the unrivaled number of cores for multi-threaded workloads in a single socket platform can also give a tough time to other dual-socket solutions in the market.

Lenovo ThinkStation P620 is the first machine of its kind that supports this many cores in a single CPU workstation. Before its launch, the maximum number of cores was 56, and that too, for a dual-processor system. On the other hand, conventional single-CPU systems can only handle 18 cores at max. Owing to the core count of this machine, it will be possible to stream 8K videos in real-time seamlessly, solve simulations quickly, perform rendering with relatively faster speeds, and interact with 3D assets smoothly. And, the best part is that all these tasks can be performed without having to move to a dual-socket system.

Delving deeper into its specs, the Lenovo ThinkStation P620 can also provide an overwhelming graphical performance, all thanks to its support for up to two NVIDIA Quadro RTX 8000 or four RTX 4000 graphics cards. Other than that, if you want even faster speeds, you’re in luck as the machine supports up to 1TB of memory as well. When it comes to storage space, the maximum you can go for is 20TB. Plus, this is the only workstation in the market that comes with PCIe Gen 4, which provides twofold the bandwidth of PCIe 3.0.

Looking at the high-end components of this machine, one thing is certain that they would require a lot of cooling. However, Lenovo has already taken care of this what could have been an issue in collaboration with AMD. Accordingly, this machine comes with a unique air-cooled solution in a custom-designed heat sink. 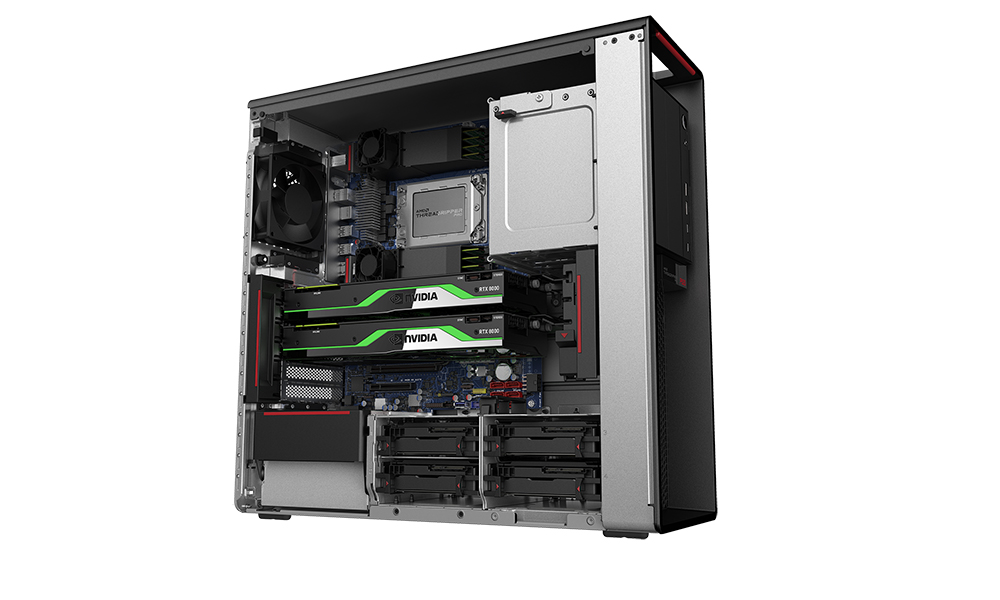 In addition to top-notch hardware, this workstation by Lenovo has a lot more to offer in ThinkShield support, ThinkStation Diagnostics 2.0, and a three-year warranty, which should be enough to provide mental peace to users. For additional security, AMD processors have features such as AMD Secure Processor and AMD Memory Guard.

Lenovo ThinkStation P620 is all set to take the workstation market by storm, all thanks to its unparalleled power, performance, and flexibility. Accordingly, regardless of whether you’re a 3D artist, game developer, or visual architect/engineer, you can rest assured that your processing needs will be satisfied with this workstation by Lenovo.

Apple Advises Not to Close MacBooks With a...